India Business Law Journal (IBLJ) has Recognized Kochhar & Co. for its Involvement in two Significant Matters that have been Named as DEAL OF THE YEAR 2015-2016

The Firm represented Simplex in a highly complex dispute relating to payment of Royalty to the State Government. NHAI claimed that Royalty was already paid to the contractor by way of price adjustment although the same was imposed after the contract was executed. The SLP filed by NHAI was dismissed by the Supreme Court on May 1, 2015. Thereafter, NHAI had filed a review petition which was also dismissed on October 27, 2015.

The impact of the judgment upon NHAI would be approx. USD 10 million as the judgment involves interpretation of standard clauses in various NHAI contracts and would benefit many NHAI contractors who have disputes regarding Royalty pending with NHAI at various stages.

Kochhar & Co. Continues its expansion with a team hire in Mumbai, forms a formidable Banking & Finance practice team for servicing clients across India and in the Middle East 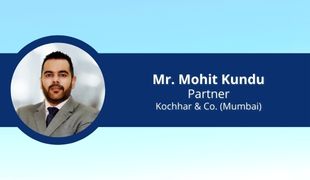 Mr. Rajarshi Chakrabarti (Raj) has been Appointed as the Co-Chairman, Legal & Regulatory Committee, The Council of EU Chambers of Commerce in India (EU Chambers).